A real cabinet of curiosities!

The country house is called Burton Constable and is well worth a visit. 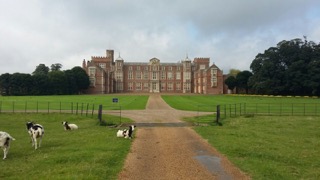 Find out more about Burton Constable Hall at http://www.burtonconstable.com

The curiosities are set out in two rooms. 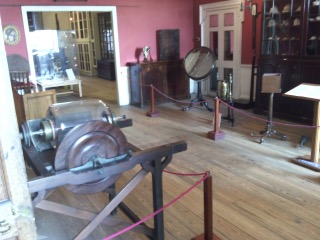 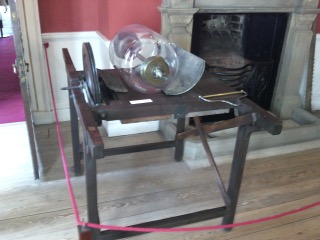 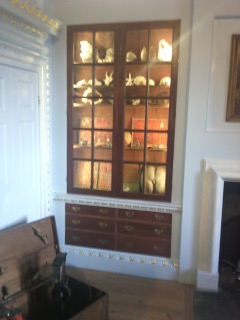 I was surprised to see that William also displayed the apparatus he used in experiments. 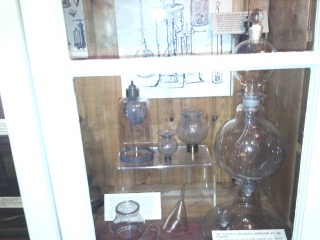 His geological specimens were kept in what seemed to be a converted writing desk where the specimens could be taken out and examined on the “desk” top. 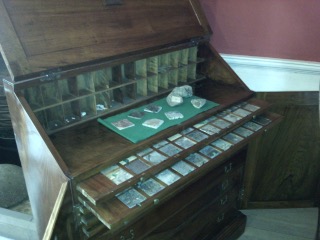 Like all scientists of his day William kept up to date with developments by reading the latest published books and writing and receiving letters from other scientists just as we use emails today. Even in a quiet corner of his rooms he still found a place for more curiosities such as the nose of a saw fish propped up against the wall. 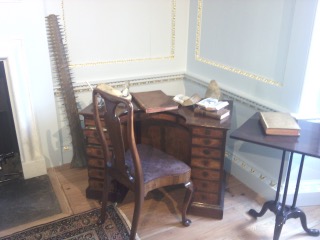 A visit to William’s cabinets of curiosities may inspire you to set up some at home at home or at school. The Curiosity Box series at http://www.peterdriley.com/books/curiosity-box/ may help to get you started.

Science and the seashore

Now is the time that seashells start appearing on windowsills as a reminder of trips to the beach in the summer. 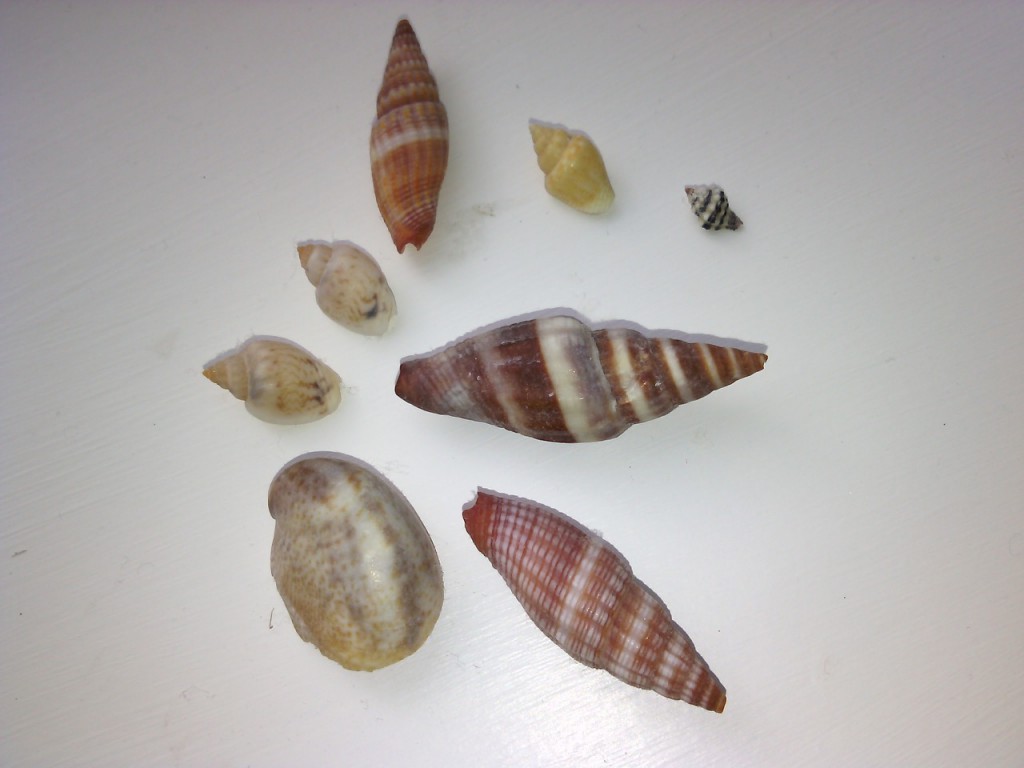 A selection of seashells

When the children picked them up they were showing two signs of a scientist – being observant and being curious.

Curiosity has driven science for centuries and continues to do so today. Children are naturally curious so it makes sense to foster this as they return to school and begin their science lessons.

The Sea Shore book in my Curiosity Box series helps you to do this by taking the readers on a trip across the sand dunes, over the strand line, down the sandy beach, clambering over the rocks to look at rock pool life then look up at the cliffs above. 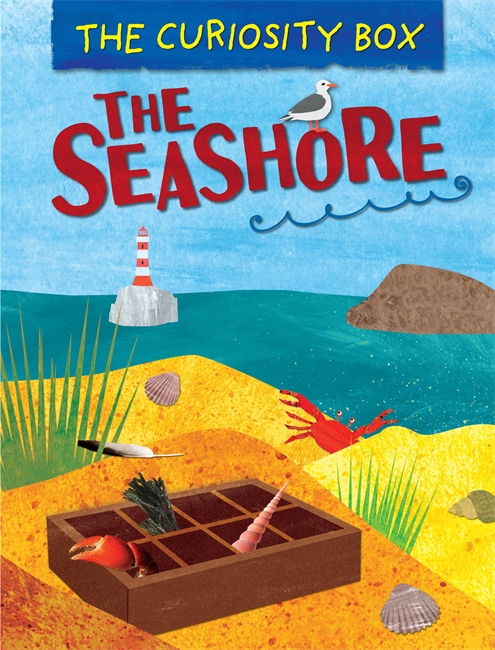 Along the way are many curiosities that the children may have seen in their real trip to the seashore. Each one is supported by information while some form a “What can this be?” challenge that can be answered by turning the page.

At the end of the book is a curious quiz and information about setting up a real curiosity box.

There is more information about curiosity boxes in my film at

If you make a curiosity box for your collection of sea shells you might like to send me some pictures for the Science Exhibition Library on this site, for children around the world to see and stimulate their curiosity.

Please send them to peter@peterdriley.com

How the Curiosity Box series came to be written

When I give talks about my writing I am always asked “Where do you get your ideas from?” As ideas come from many different things I usually give a very general answer but for my new series of books, Curiosity Box, I can be very specific.

When I was setting up the website I decided to provide free downloadable posters about the scientific method. I thought the stages in the method were best represented by a group of children doing an experiment so I constructed a storyboard on which to place the various stages. 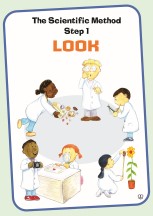 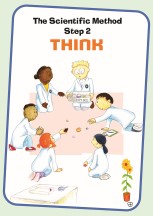 I settled on an experiment on gravity with the children investigating the speed at which things fall. The problem was to find a way to set them off on an investigation. At the time I had been reading about how cabinets of curiosities were set up in the sixteenth and seventeenth centuries and eventually were developed into museums. I then thought of the things that my granddaughters collect such as pine cones and pebbles. These objects are usually left on display on a bedroom windowsill which could be thought of as a small modern take on a cabinet of curiosity. 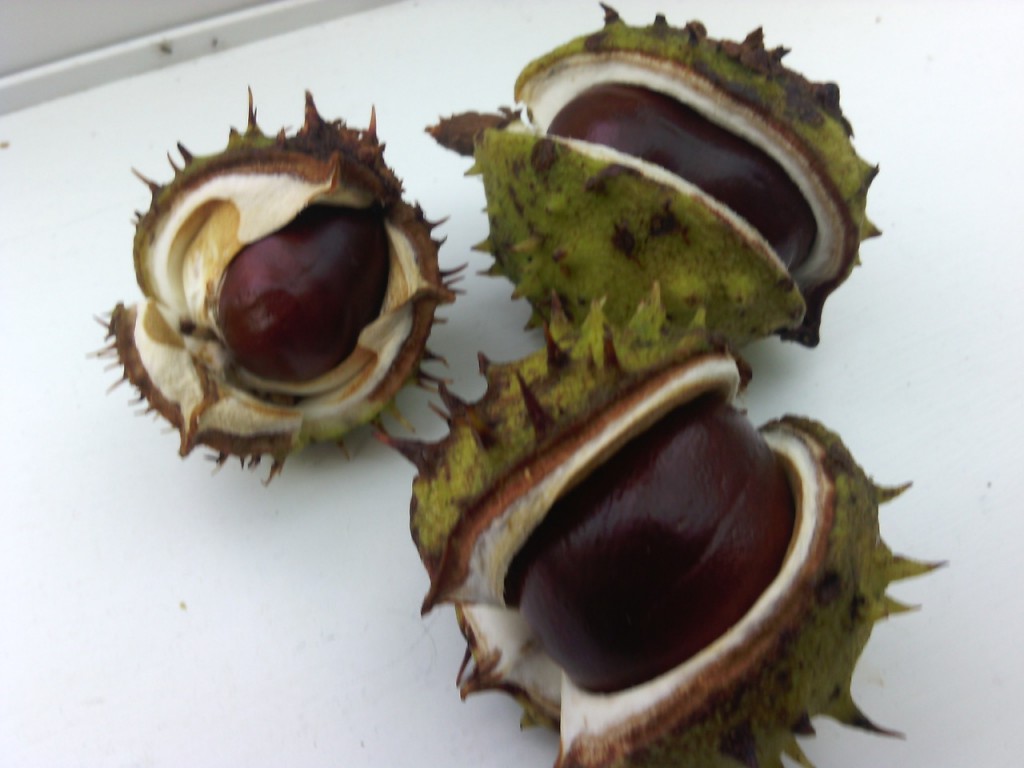 I then thought “What if one of the children gathered all her curiosities into a box, then tripped and the curiosities fell out?” This idea worked and so became part of the story. However I was still intrigued by the idea of a curiosity box so made one up in a shoebox and visited local schools with it. The response was so positive that teachers started setting up their own class curiosity boxes. I thought perhaps a series of books about curiosities that children can easily observe might be a help so the first two titles in the Curiosity Box series are now published, two more will be out in June and two final books to complete the series published in August. 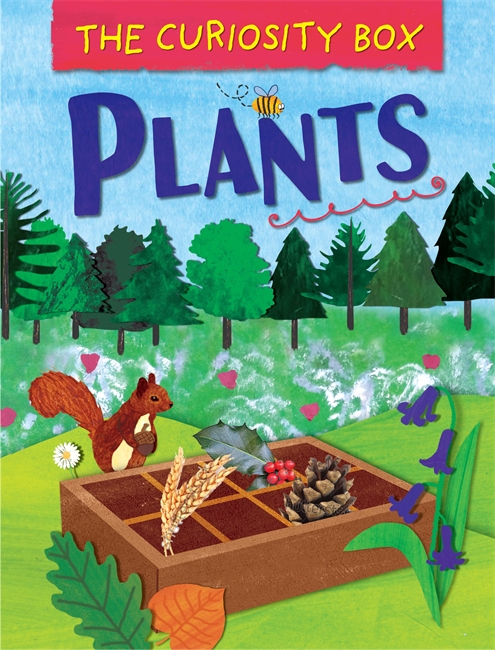 “Have you any signs of a scientist?” This is a question I ask in the introduction in one of my textbooks for 14 year olds but it can apply to anyone.

I then ask “When did these signs start to show?” and I provide a time line to help the students decide. One of the earliest signs of a scientist occurs in babies, it is curiosity. When I was a baby I apparently annoyed my mother (not for the last time) by picking all the threads of cotton out of my towelling nappy, holding them up and watching them fall into my pram. 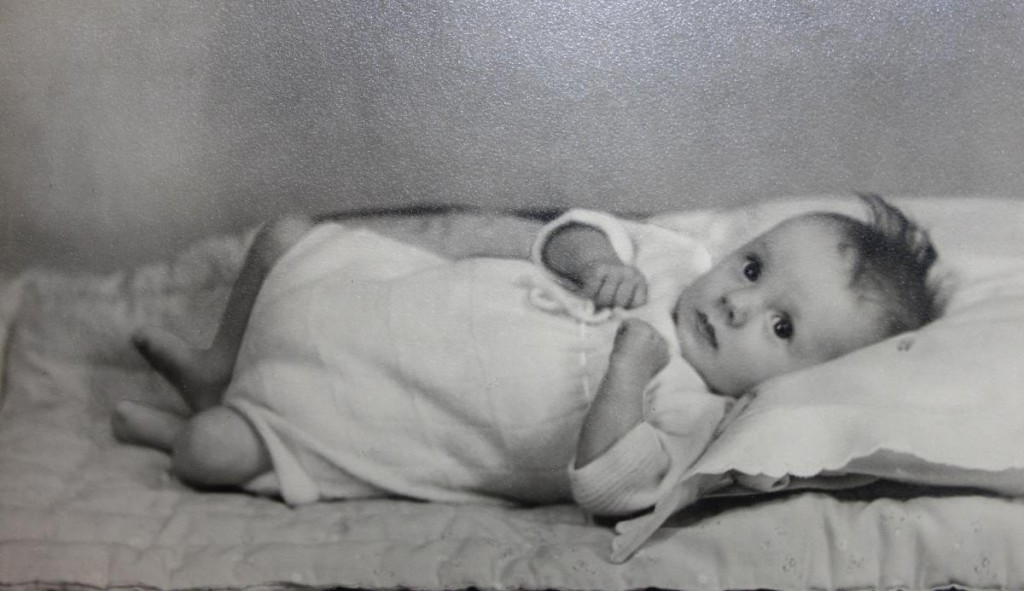 Me as a baby

My curiosity produced bald nappies and perhaps an early inkling of the power of the gravitational force. Many decades later my new science series about curiosity called Curiosity Box is launched this month.

I think the books can be used in several ways. They can be read to young children by parents, carers or teachers and as the book is read, the illustrations can be explored by the children and questions asked before turning the pages to find the answers. At the end of the book the children can test their knowledge by talking about the items in the curiosity box that has been prepared for them and then try to answer the Curious Quiz. There is also a section on making a curiosity box which provides useful web links. The books could be read by older children on their own, but you may like to join them by helping them to make their own curiosity box. You may like to take photographs of the curiosities you find and put them in your curiosity box. Here is a curiosity I photographed this week. 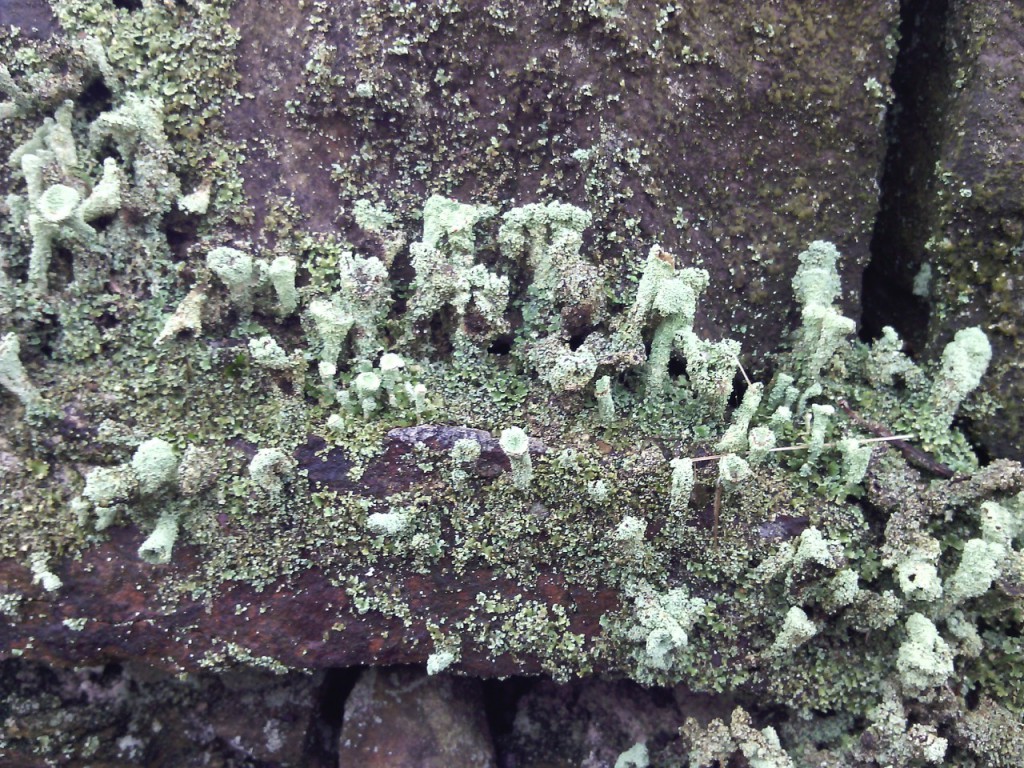 It is a pixie cup lichen.

What is this salt-water curiosity?

Last week’s curiosity was a plant called montbretia. Each swelling is called a corm. A corm is an underground stem. It stores food for the plant to use in the following year. When the plant grows, it forms a new corm on top of the old one. 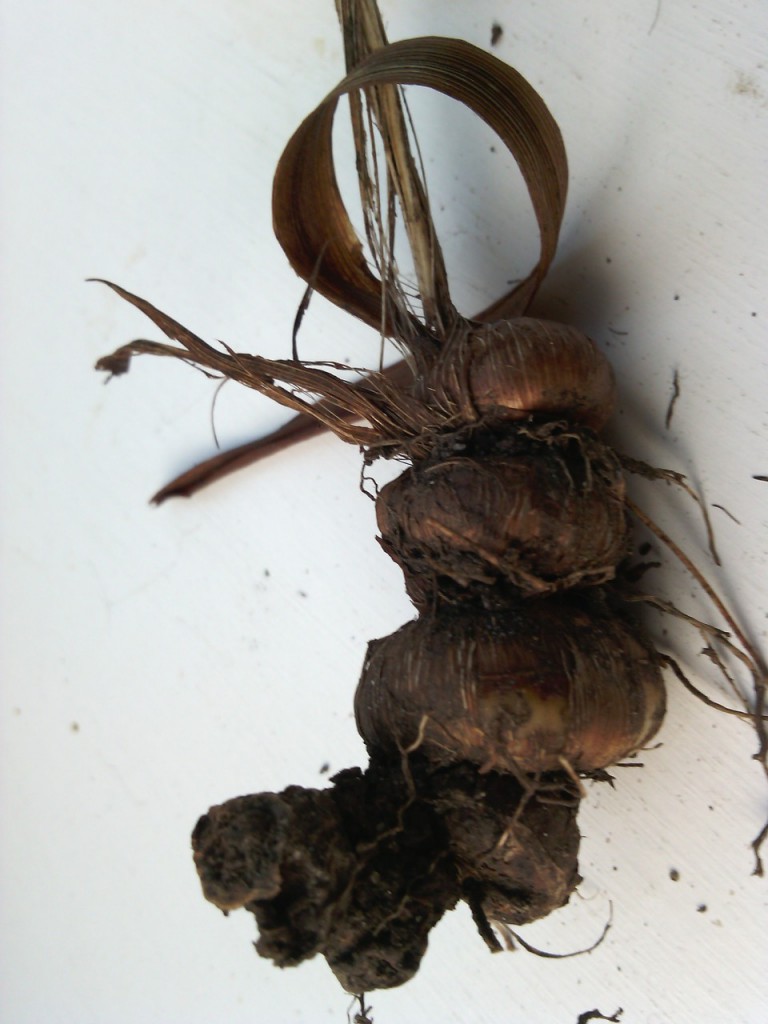 In this picture we have a very old corm almost buried in the soil, a younger very large corm above it, a smaller corm above this that is younger still and the smallest corm that has been formed this year at the top.

As Ettie the canal barge sailed through waters close to the Mediterranean Sea the water around her changed from fresh water to salt water and this animal came floating by. It had come from the sea. What is it? 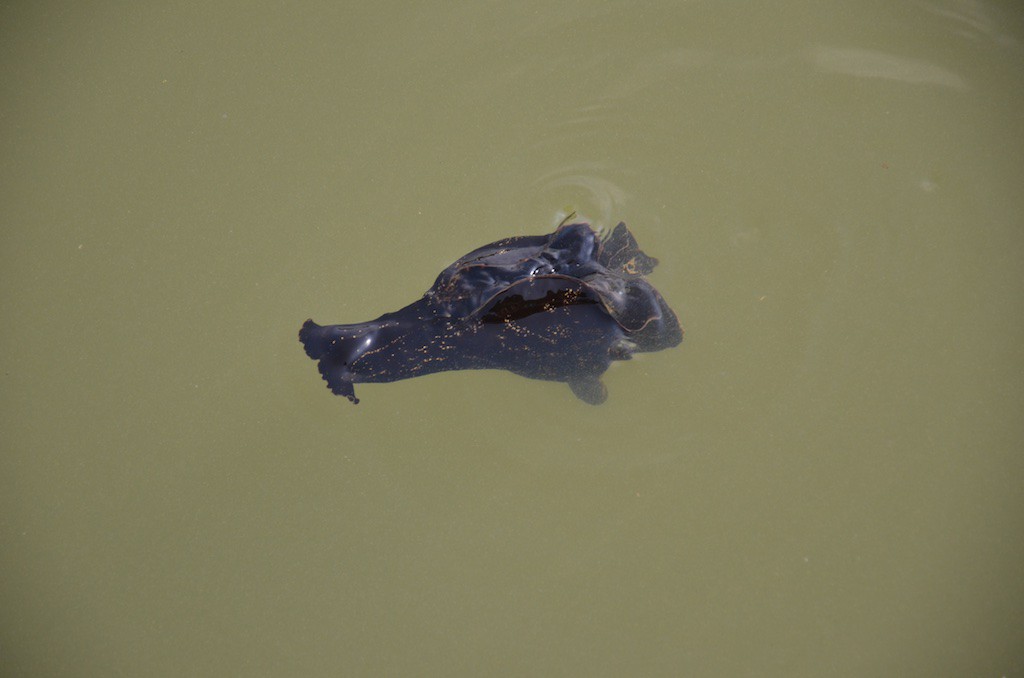 Last weeks curiosity has opened up, did you guess what it was?

Does this third picture help you answer? 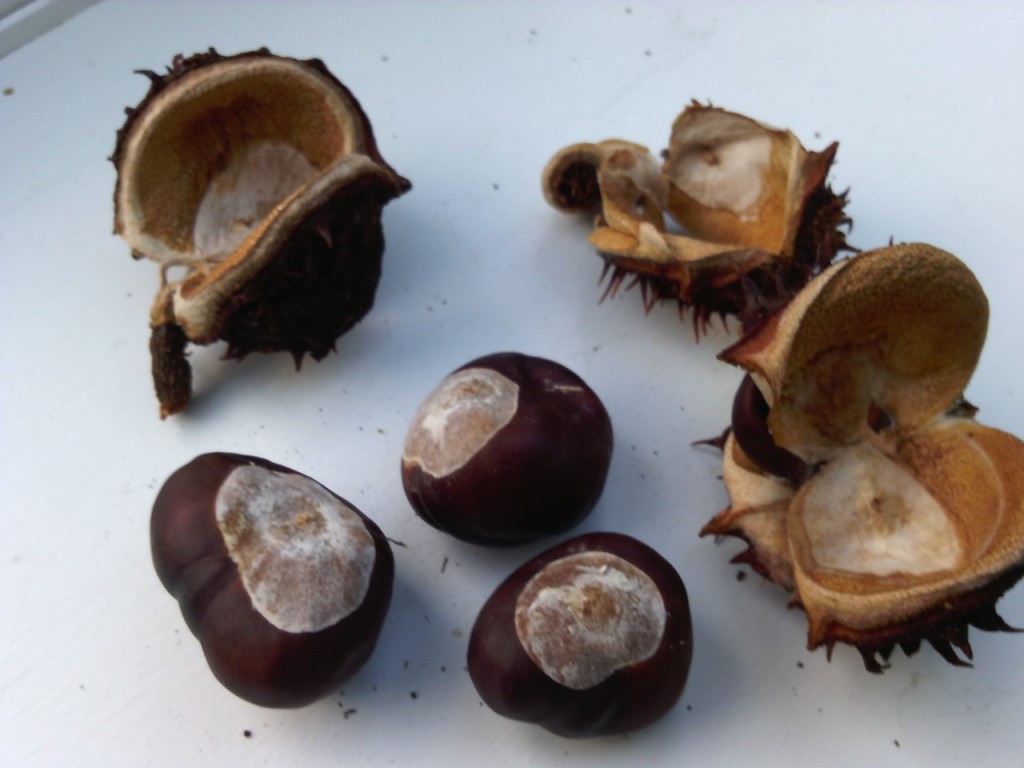 It’s a horse chestnut seed, commonly known as a conker!

While clearing my garden for the winter I dug this up. Is it an animal or a plant? 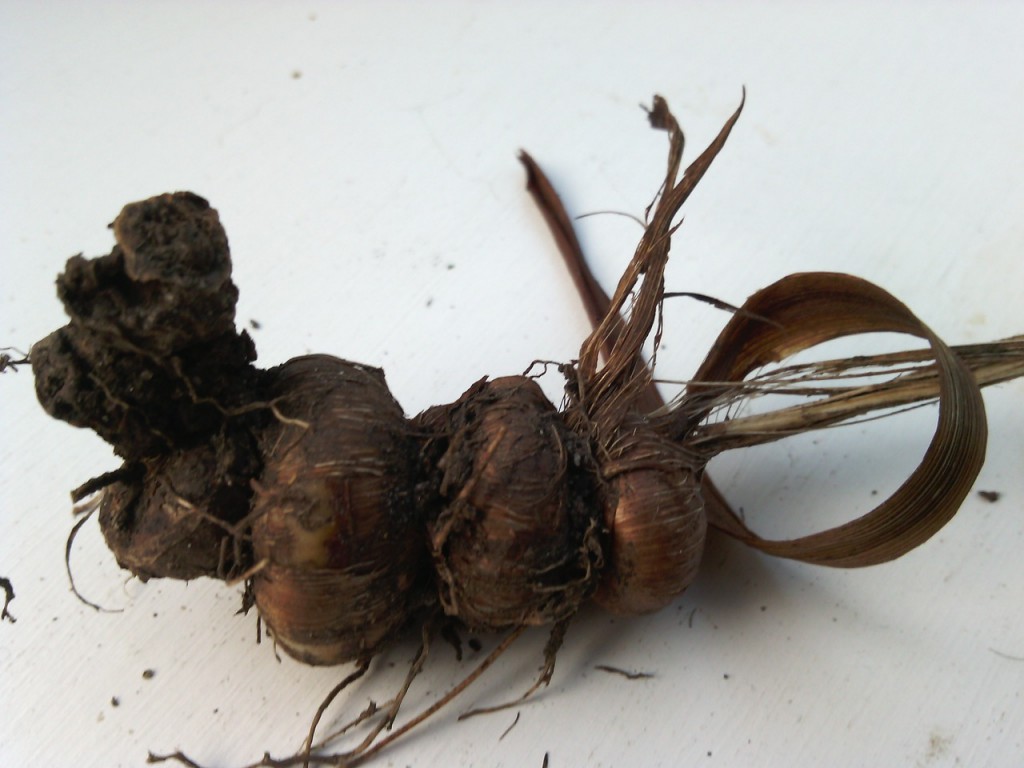 Can you “conquer” this curiosity

The last curiosity I posted was a fossilised leaf.

This week, I’ve collected some fruits from a tree near my home. Do you know what is inside? 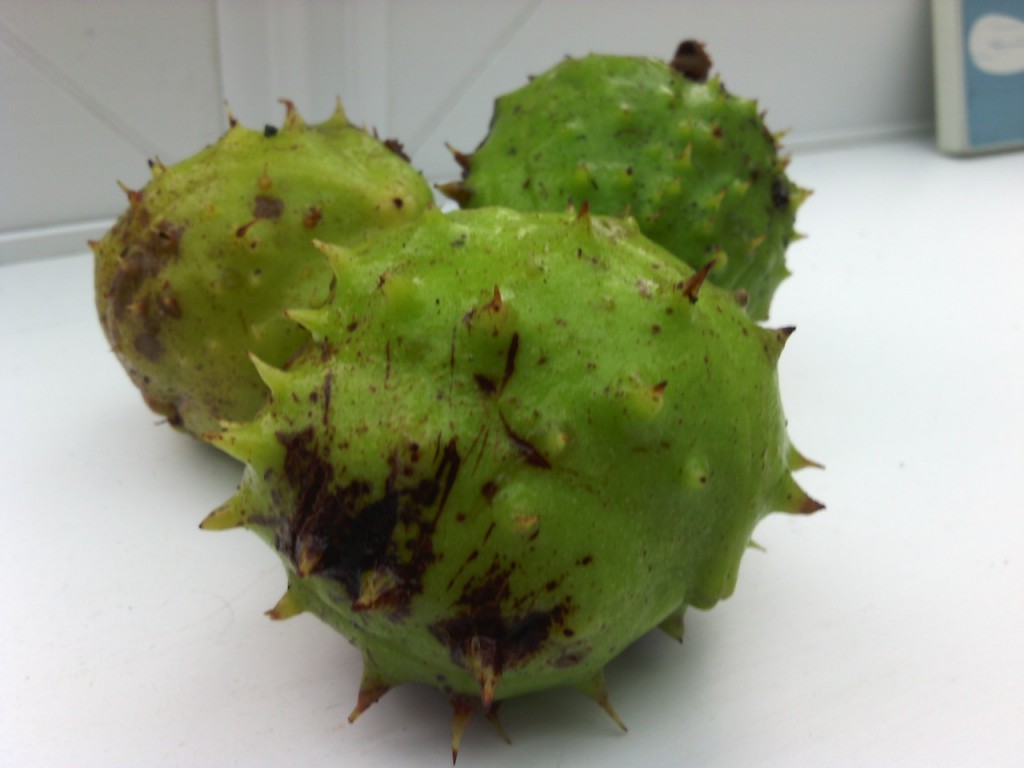 Can you identify this forest fossil?

I have another fossil for you this week, can you guess what it is? 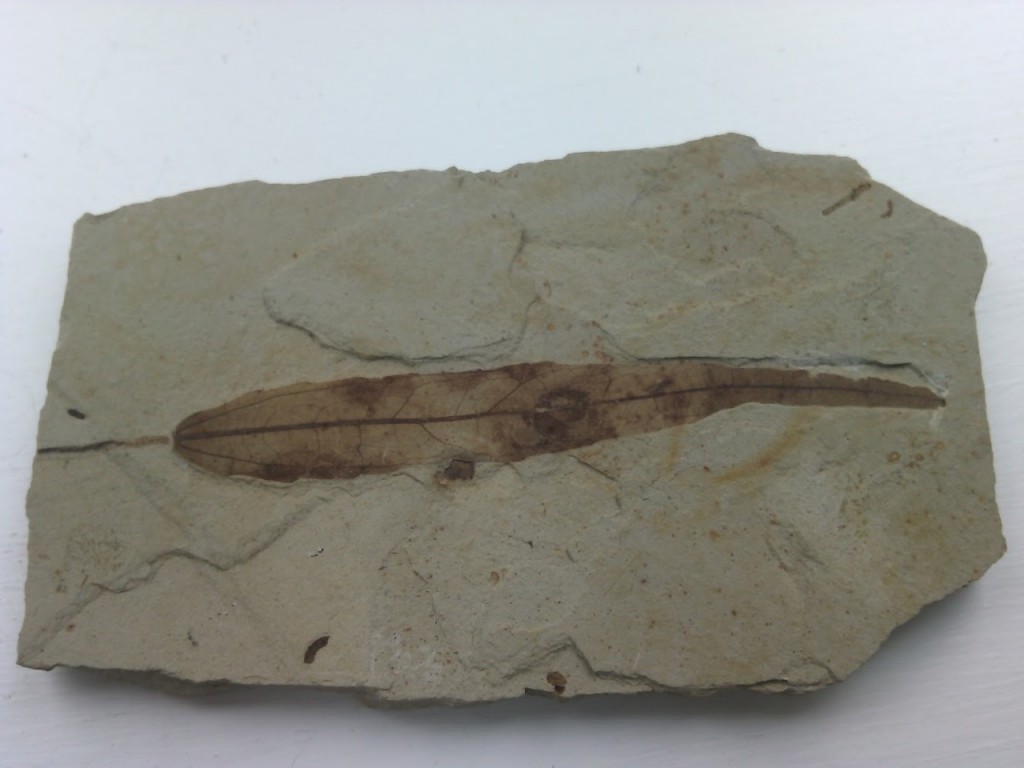 Can you identify this aquatic fossil?

Last week’s curiosity was part of the trunk of a fossilised monkey puzzle tree. It’s about 180 million years old and was found in Madagascar.

This week I have another fossil for you, can you identify this aquatic creature? 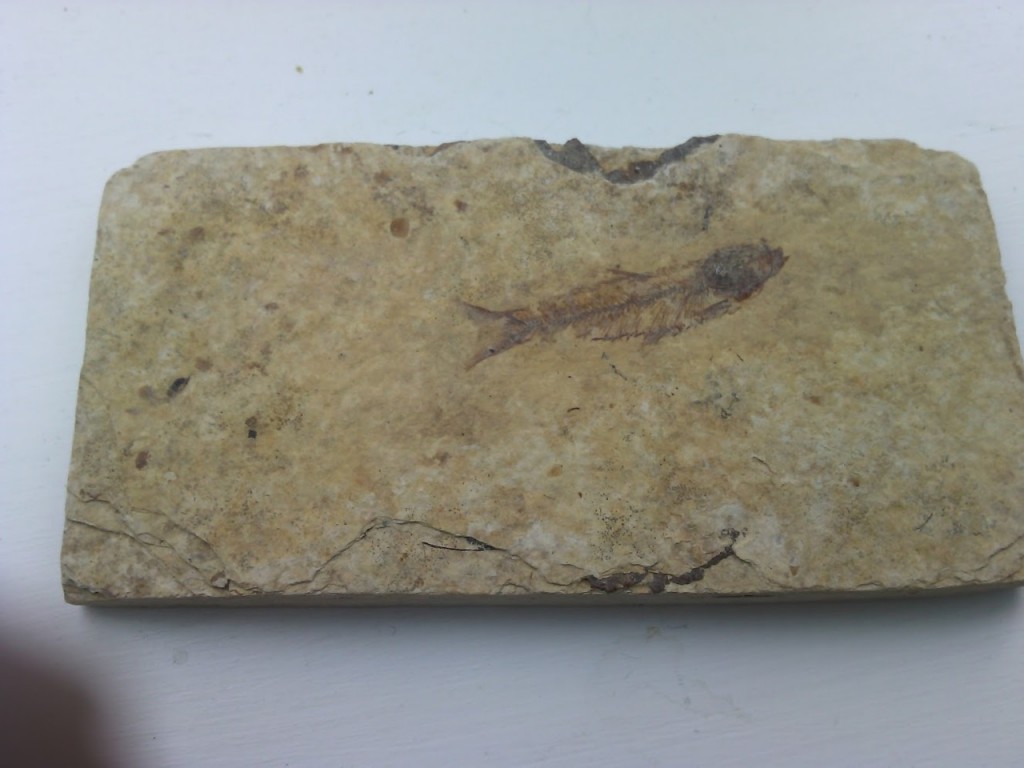 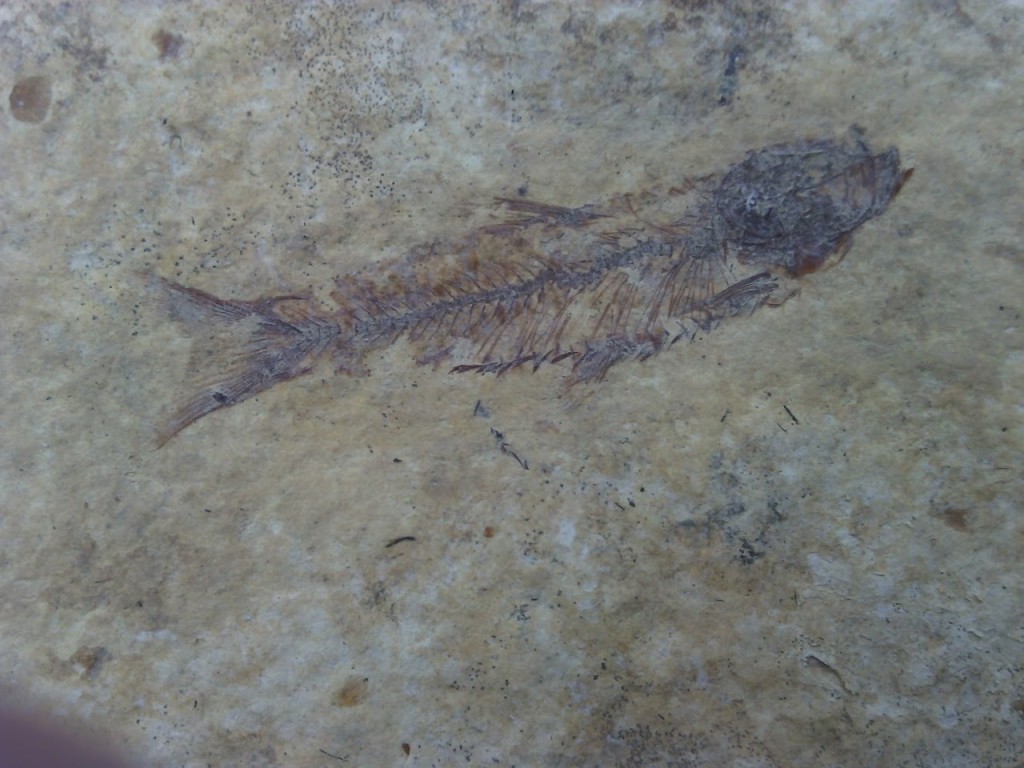 If you have any curiosities of your own you’d like to show, send a photo of it to me by email. I might use it on the site!

What is this Jurassic curiosity?

Last week’s curiosity was the fossilised tooth of a baby Woolly Mammoth. It is about 20,000 years old and was dredged up from the sea bed off the coast of Lowestoft in England.

This week, can you identify what this is a fossil of? Clue: I looked at a present-day example of this when I visited the Jurassic Garden in Whitby recently. 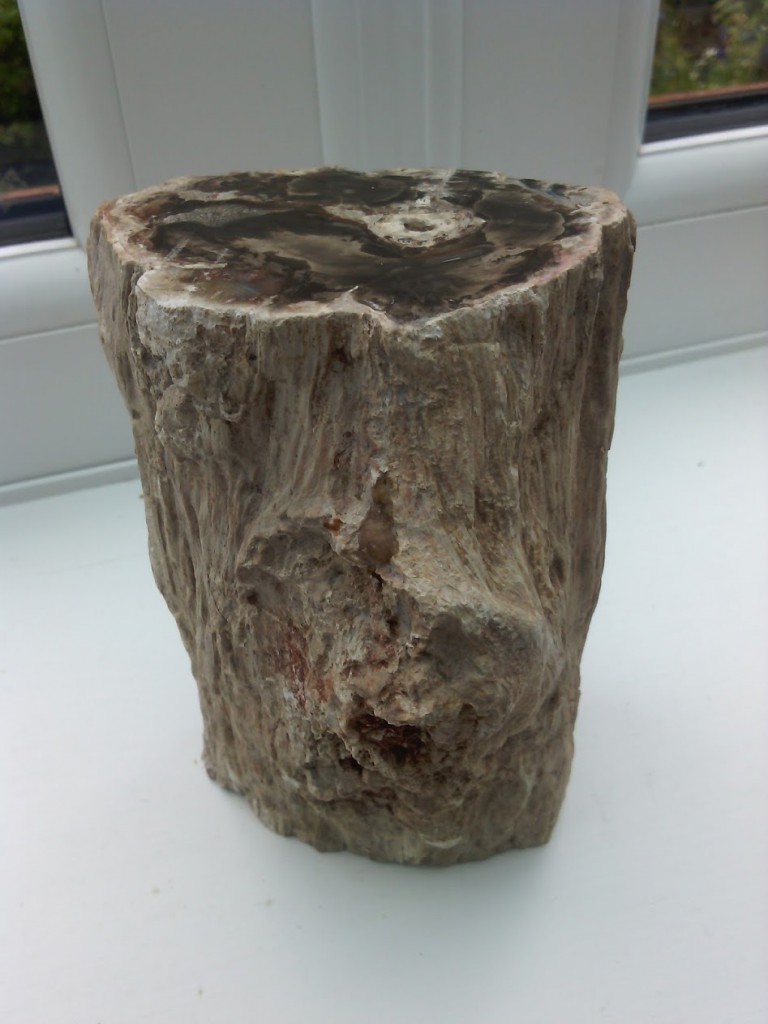