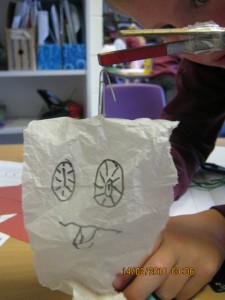 Here is a year 3 project comparing the force of gravity with that of a magnet.

First make a ghost out of a paper bag and attach a metal paperclip. Then, hold the paper bag just below the magnet. The ghost hovers! 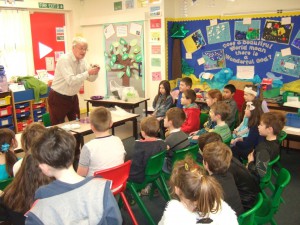 For World Book Day last week I was in Settle School, building a planet with Year 3.

We started with tiny pieces of modelling clay. They represented dust in orbit around the Sun as the Solar System formed. Each piece was stuck to the other until we had a small lump. We then stuck ten small lumps together to make a larger lump then ten larger lumps and so on until we realized how electrostatic forces and gravity worked on rock to make the planet we stood on.

Next we thought about volcanoes which punched through the planet surface and made a traditional model with vinegar and bicarbonate of soda. As the model exploded and oozed its red ‘lava’ the children talked about volcanoes today and one said “If volcanoes send out so much rock why is the planet not getting bigger?’ A question perhaps worthy of those asked in the seventeenth century when the Royal Society was established?

After comparing the inside of a hard boiled egg to the inside of the Earth and observing how the cracked egg shell looked like tectonic plates we investigated what happened when plates collided by crashing two towels together and seeing ‘mountains’ rise. 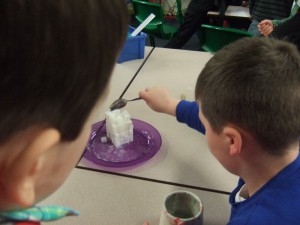 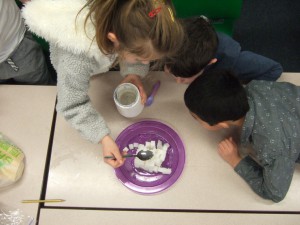 This led on to landscapes and as Settle is in limestone country we built model limestone mountains out of sugar cubes. We talked about weathering and decided to rain on the mountains with spoons of water. In time this produced pot holes on the top, caves in the side and eventually some caves collapsed to produce gorges – all features of the landscape around the town. 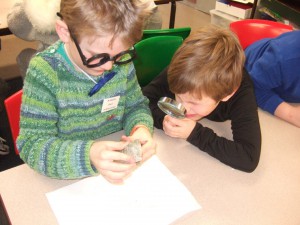 Finally I pointed out that there are other rocks not far away called millstone grit that I had brought from the neighbouring county. It wasn’t long before a fair test was set up to see which was harder Yorkshire limestone or Lancashire millstone grit. The children made their predictions, rubbed the rocks together, examined the fragments that crumbled away and found their data supported their prediction – the samples in this case showed that the limestone to be the stronger rock!

Find out how to make a sugar cube mountain and a really explosive volcanic eruption on pages 9 and 21 of Stuff in the Real Scientist series.

For the geology element of the new English science curriculum look into Rocks and Soil in the Moving up with Science series.

Pippa aged 6 has been busy in the kitchen making a model of the Solar System!

If you try any of the activities in my books and would like to show them off on my blog, please email a photo to the address on my contact page! 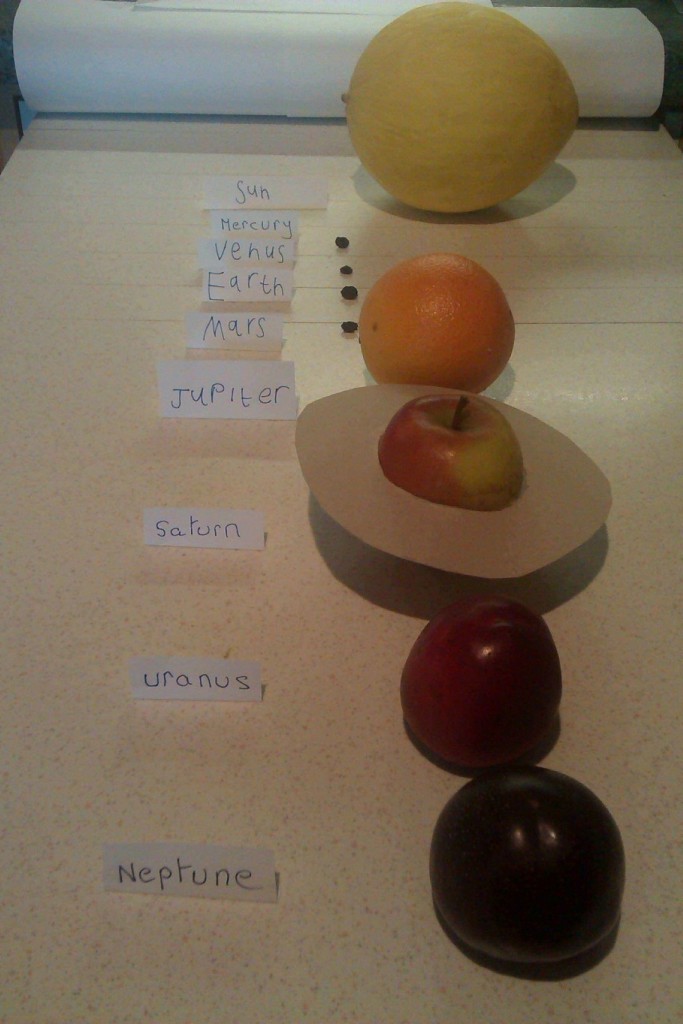 Its become part of a tradition in Settle, Yorkshire for the children in the nursery and reception classes at Settle Primary School to make winter visits to the Play Barn, a children’s soft play centre and activity hub in the town, for cross curricular activities.

Following the writing of the cross curricular Hot Topics series  I devised a science session based on a farm, as we are in the Play Barn, and on growing plants, as we are coming out of winter.

Through a model farmyard the children are introduced to the animals and asked to sound like them. 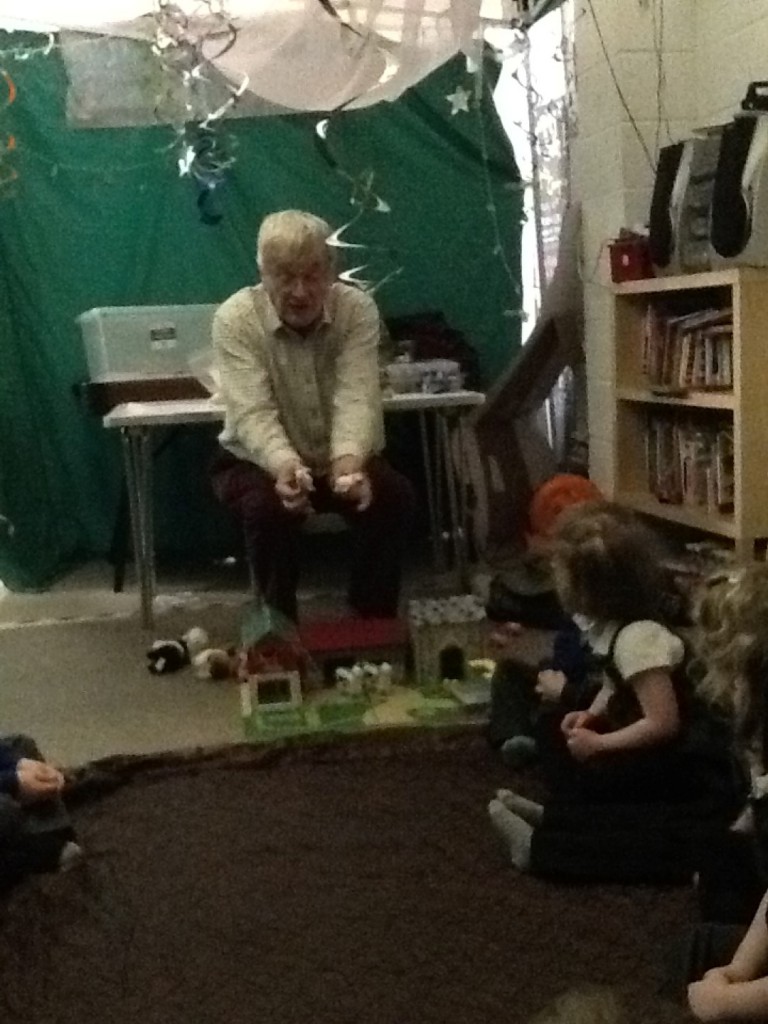 We discuss plants grown on farms, focus on how plants grow from seeds and set up pots of broad beans. 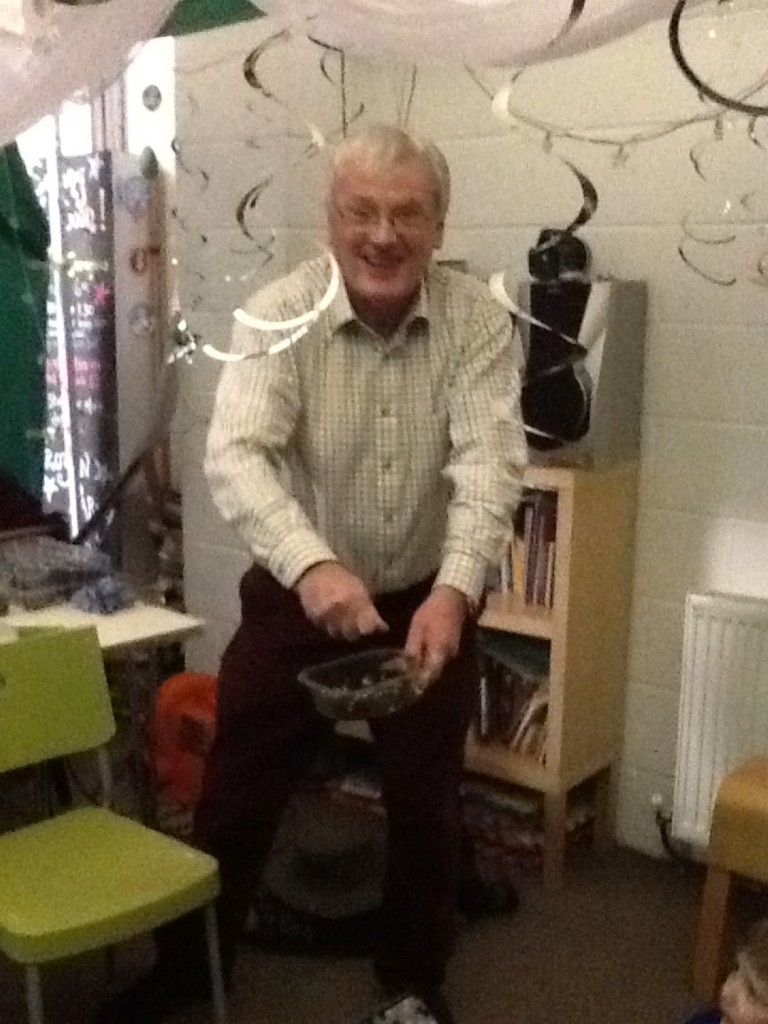 We finish with a story I wrote called ‘One for the Rooks and One for the crows’ based on a phrase used by farm labourers sowing seeds in the time before mechanization. In this rhyme the children flap their arms (wings), make a beak of one hand and peck the ground. I eventually dress up as a scare crow which saves the seeds and lets the crop grow. 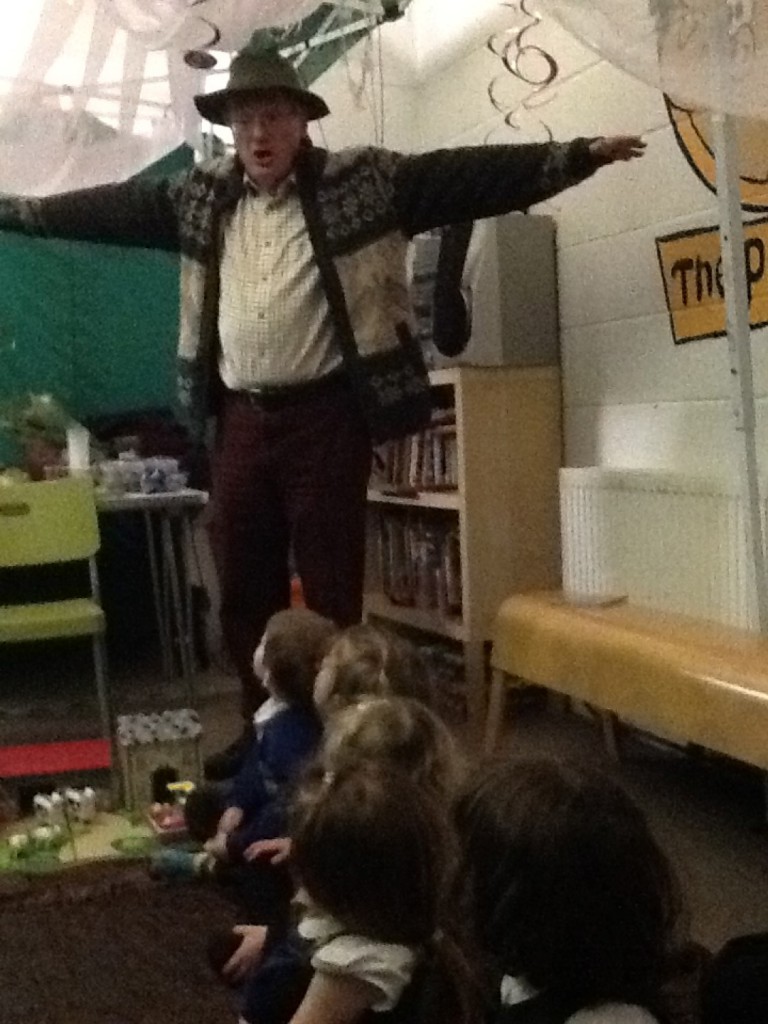 This is followed up back in class with the children making observations on the germination of the bean seeds, the pots are transparent and the growth of the plants. The children can take photographs of their plants as they grow and by the summer they will find the plants have made seeds of their own thus completing the plant’s life cycle.

As part of the school conservation project, Settle Primary School in the UK built an insect hotel using recycled materials. The aim was to encourage a range of invertebrates to set up home in it and breed. This is an example of making a scientific enquiry over time. 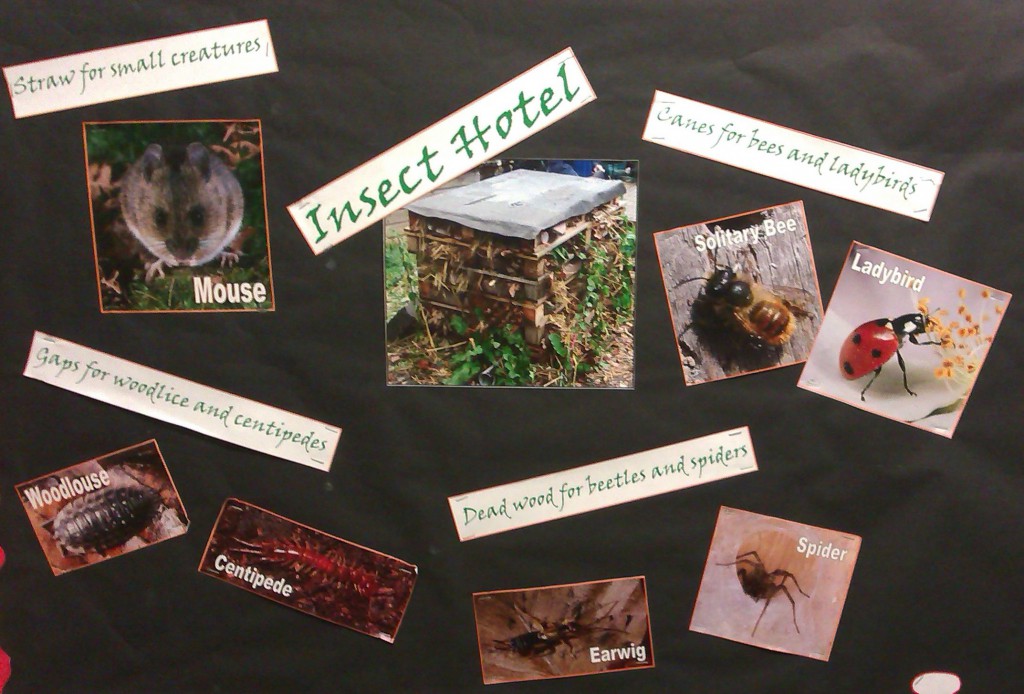 Here’s a close up of the insect hotel. 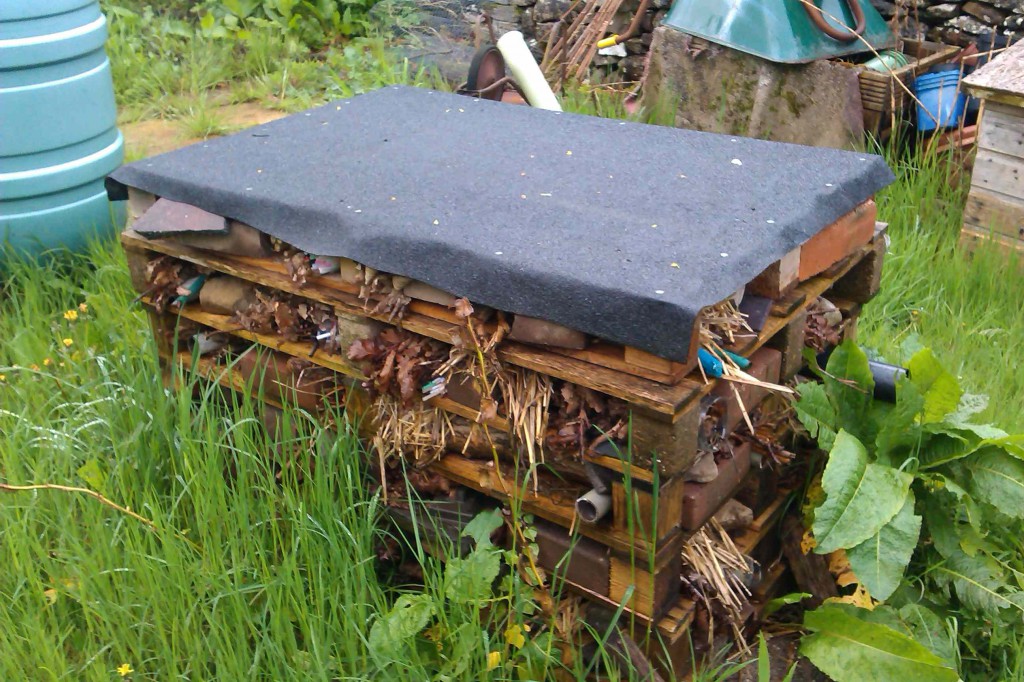 Creating a solar system in a shoe box

Nicole in Year 5 at Wellfield School, UK, built this display involving model-making. Researching using secondary sources to sequence the order of the planets and record their colours. 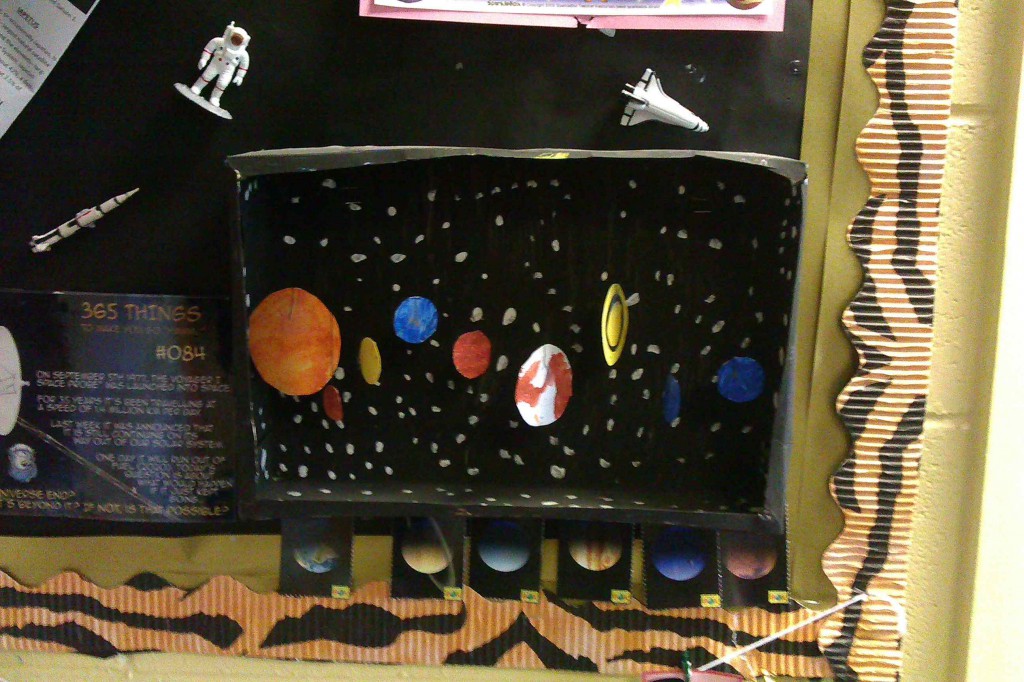