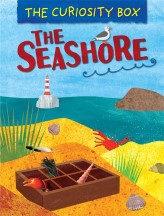 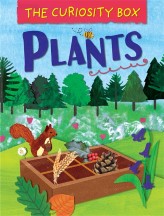 What will you discover when you open up the curiosity box?

Have you ever looked at the objects inside a curiosity box? What did you see and what did they feel like? DId you recognise some of them or were there things in there that you’d never seen before? Books that take the magical charm of collecting curiosities and join them together with the science behind some of the wonders of the natural world. Children will be inspired to take a closer look at objects and the world around them and begin to question how and why nature designs things in certain ways.

The Curiosity Box series are books that encourage KS1 readers to engage with core science and nature topics, while developing other key skills in thinking and reasoning in an utterly absorbing and charming way.

The Curiosity Box: The Seashore

The Seashore looks at some of the different habitats along the coast and the plants animals and objects that you will find there. From sand lizards hiding in the sand dunes, to all sorts of shells, crustaceans and seabirds. Children will love discovering a bit more about this favourite location.

Buy The Curiosity Box: The Seashore from Hachette

Plants focuses on the different types of plants, including the trees, flowers, grasses and fungi you may encounter in habitats ranging from a park or garden, a field, a pond and a wood.

Minibeasts focuses on the different types of minibeasts we encounter, such as insects, spiders and molluscs like slugs and snails. It links them to the habitats they live in and examines their behaviours and the roles they play in pollinating, composting and eating other bugs!

The Curiosity Box: Rocks and Fossils

Rocks and Fossils focuses on the different types of rocks found on Earth and their different properties, such as granite, slate and sandstone. It looks at how rocks form deep inside the Earth and how important volcanoes are. Fossils are also revealed, including trace fossils, such as dinosaur footprints, and how fossils such as ammonites are formed.

Buy The Curiosity Box: Rocks and Fossils from Hachette

Animals takes a look at the five types of vertebrates on our planet: fish, mammals, reptiles, amphibians and birds. Find out about the types of habitats these animals live in, and all about teeth, bones, feathers, skulls, tadpoles, scales, eggs and loads of other fascinating science stuff about animals.

The Human Body looks at some of the amazing parts of your body, some that you can see and some that are hidden inside you. Find out why your skin is so elastic, how your senses work and why yucky things like spots and sweat are actually important for a healthy body. Children will love discovering a bit more about the science behind what makes their own body so special.

Resources and downloads for the Curiosity Box series

Join my newsletter to keep informed about new resources for this book series.