Science Around Us – Why Is The Sky Blue

Children often ask questions which need a scientific explanation. The memory of the explanations can be extended when an activity is featured. In this series of blogs I have put together some questions that children ask and offered simple explanations which are illustrated by activities that my youngest granddaughter Pippa carried out.

I also include links to other sites to provide further information and details of how to carry out practical work with your children if you wish.

I hope the series will be useful to parents, grandparents and carers for talking about science after school or in the holidays and maybe teachers may find something of interest too.

I am beginning with a series of topics related to the closest thing to us – the air and atmosphere.

Science Around Us 1. Sky colours

Why is the sky blue? 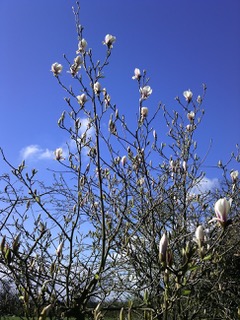 Blue sky above a magnolia tree in Lancashire.

Warning Never look at the Sun in the sky it can damage your eyes!

The colours in the sky come from the rays of light that reach us from the Sun. Sunlight is made up from light of different colours – the colours of the rainbow. Light travels in the form of waves (called electromagnetic waves) and each colour has wave crests that have a certain distance between them. This distance is called the wavelength. Blue light has short wave lengths and red and yellow light have longer wave lengths.

When you look up into the sky you are looking up into the atmosphere. It is made up of molecules of gases, mainly nitrogen and oxygen. As the sunlight shines through the atmosphere the waves of light are scattered and reflected by the molecules of gas. The short waves of the blue light are scattered and reflected the most and this makes the sky blue. 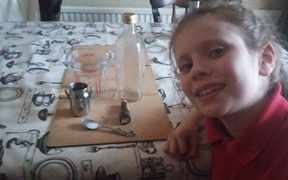 Pippa has collected items to make a model of the blue sky.

There is an empty olive oil bottle, a torch, a jug of water, a small churn of milk and a teaspoon. The milk will take the part of the molecules of oxygen and nitrogen. Before she uses the milk she makes sure she makes a fair test. This test will show that is the milk the makes the blue light and not the water.

First she fills the bottle with water, places it on its side and shines the torch into the bottle 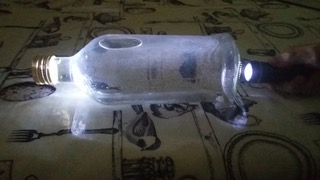 Shining the torch through water in the bottle.

Next she adds about a third of a teaspoonful of milk to the bottle and shakes it up then shines her torch again. 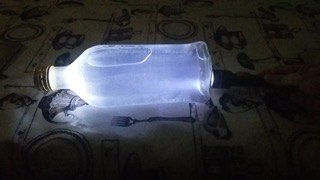 Shining the torch into the model sky

Why is the sky less blue near the horizon? 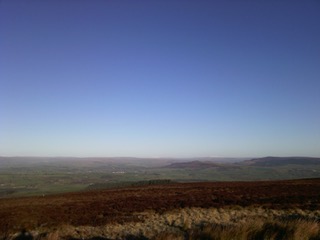 A clear sky over the Yorkshire Dales.

In this picture you can see that the sky has become whiter as you look towards the horizon (the place where the Earth meets the sky).
This change is due to the Sun sinking lower in the sky (It is on the left of this picture) and as it does so its light rays pass through a thicker layer of the air. See the picture here.

As the light passes through more air it is more greatly scattered and the different colours of light mix up to make a whitish light.

What makes a sky red?

Red skies can occur in the direction of the Sun at sunrise and sunset. Again it is partially due to the extra thickness of the air that the light passes through but is mainly caused by dust particles and even salt crystals blown up from the surface of the sea. They scatter the blue light completely,but red light is scattered less so making the sky appear red. 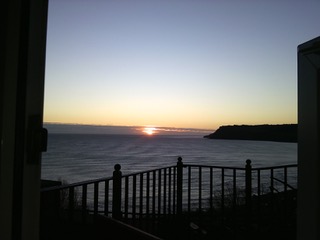 Remember the warning – Never look at the Sun it can damage your eyes.

Here is an experiment to show you how to make a model red sunset.

Next Topic – Why are clouds white?

Posted in: Class Ideas Science Around Us by Peter D Riley June 1, 2018