Building up a science time line

During the course of the year I hope to be building a time line that can be used by KS1, KS2, KS3 and Checkpoint Science. The items in timelines in books and posters have to be kept short because of the sheer volume of topics they have to cover in a given space. Some of my first books – Signposts to Science series

had timelines in them which I had to edit down to make them fit a spread – always a shame to have to leave out an idea.

Here, on the website, with more space, I hope to be able to add a bit more information to the timeline to show how the scientists thought and how these thoughts led them to their conclusions. In the following weeks I plan to post snippets from the time line as I develop it which in its own time will be put on the website. These snippets are aimed at anyone and in places I add references to my books which can be found on the website. 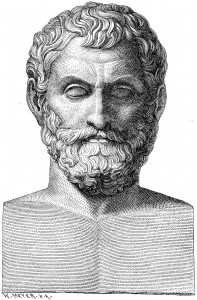 People have always sought explanations for what they experience in their surroundings. For much of history many of these explanations were embedded in superstition and magic but in Ancient Greece philosophers began to look for rational explanations for their observations of things and events in the world around them.

Thales, generally considered as being the first scientist lived in Miletus, now in Turkey, between about 624 – 547 BCE. He looked around and saw how water could change from a liquid to a solid when it froze and to a gas when it boiled. This link between water and the three states of matter led Thales to believe that everything was made or contained water. He considered water to be the arche or perhaps more simply the primary substance or element of everything.

Although Thales is considered a scientist because he thought up a rational explanation for a phenomenon he did not take other steps, now called the scientific method to justify his explanation. His idea, however, did stimulate other philosophers to think about matter and its composition.

Moving up with Science Matter page 28 The water cycle

Anaximenes (585BCE – 528BCE) was a philosopher in Miletus in the time of Thales and disagreed with his idea about water as the universal element and suggested it was really air. He claimed that as it envelops everything and we need to breathe it in and out to survive it must replace water.

As the thoughts of the philosophers spread they were taken up by philosophers in other places. Xenophanes (about 570 – 478 BCE) lived in Colophon , now a ruin in Turkey and added the idea everything containing the element earth as things grew in it and things fell back to it.

Heraclitus who lived in Ephesus (now a ruined city in Turkey) around 500BCE. From his observations of the world and saw that it was full of change. For example, living things grew, aged and died. Non living things like water also changed forms as Thales had observed. He observed a fire burning and how the materials on it changed their form ending it seemed as flames. From this he believed the universal element was fire.

In addition to identifying four kinds of element the philosophers also ascribed to them specific properties. Water is wet and cold, air is wet and hot, earth is cold and dry and fire is hot and dry.

These ideas and properties led to someone attempting an early theory of everything.